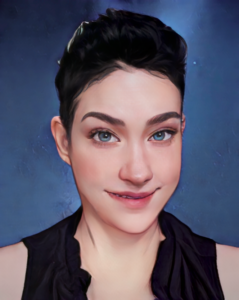 Rose Guildenstern writes fiction teetering on the edge between eerie and enlightening. Unwilling to settle for either/or, at university she majored in Theatre Arts, English, Biblical Studies, and Wonder (in which she did all her postdoctoral work). An armchair philosopher and former high school teacher, at mid-life she journeyed with her family (and French bulldog) from the deserts and earthquakes of California and into the woods and thunderstorms of Pennsylvania where anything can happen (and probably does). In her opinion, change is what keeps life enthralling, and a good book makes life worth living.

Why the pen name "Rose Guildenstern," you ask? Rose as in Juliet's immortalized line, "A rose by any other name would smell as sweet," of course, but even more a reference to Tom Stoppard's play "Rosencrantz and Guildenstern Are Dead," about the most inconsequential characters in Shakespeare's own "Hamlet"--for it is not the author's name or identity that matters a whit, but only the meaning and the work itself that is remotely worthy of note.

Rose's debut novel, Iago’s Penumbra, is a modern treatise on love and the darkness that redeems us, rooted in the works of Shakespeare—with a little philosophy, physics, and cosmic horror thrown in, just for fun. (To be published in early 2023.)

Juno Lucina is the award-winning author of The Healing Tarot deck (illustrated by Monica Knighton) as well as The Kingdom Within Tarot deck and The Alchemy of Tarot book (both with illustrator Shannon ThornFeather). Juno is an empress by design and a star by nature. Ever fluid and changing, Juno is more a verb than a noun, more an introduction than a conclusion. She wishes that All awaken from Vishnu's dream, to see the truth and embrace All That Is. Juno is just a Story pointing the Way.

Watch for Juno's two new cartomancy projects, a unique book about tarot entitled Tarot Beyond Belief: Using the Tarot to Choose the Stories We Wish to Live , and an entirely new type of oracle deck, Frame This Oracle.

In Roman mythology, Juno Lucina is the mother goddess who first opens a newborn's eyes to the light.