The Astrology of Tarot 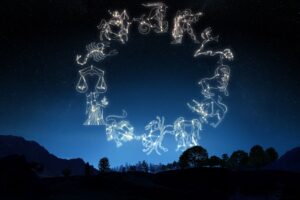 Astrology is the study of the rhythms, patterns, and continual changes of our solar system. Imagine for a moment a large piece of fabric stretched as taut as possible. This is much like the cosmos of existence. Now, imagine that one tiny portion of this vast expanse jiggles ever so slightly, and the entire fabric responds to the change by moving as well. Yet, to anyone who is unaware of the original shift of balance, this movement might appear “mysterious” or “unexplainable”, seemingly mere coincidence or chance. So it is with most of humanity. Trapped inside our own narrow viewpoint (and our own minds and bodies), we do not grasp the grander design of the fabric of the cosmos. The symphony of the spheres plays a dissonant note, and we see only the “problems” that result for us on a personal level, not realizing that discordance is an essential part of dynamic harmony. Every quark, every atom, every star, and every galaxy has joined together to form an intricate web, but often we feel like the trapped fly at the mercy of the dreaded spider. The study of astrology can help us move beyond our limitations and broaden our understanding of existence and our place in it.

Astrological impulsions are akin to a river of energy in which the individual (or group) is currently swimming, conveying all its contents toward a specific direction; if you carefully dam a river on one level, you still have to deal with the mounting pressure, a pressure that will inevitably express itself in some other area of your life.

There are three traditions of astrology that have lasted the test of time and are still practiced today:

Astrological Tarot is based on the system of Western (Tropical) Astrology. Ancient Western (Babylonian and Greek) astronomers methodically watched and wrote down their observations of the skies, recording cycles of change, daily events, and natural phenomena. These astrologers (which simply means those who study the stars) divided the Sun’s path through the sky into twelve quadrants and gave each cluster of stars a name to identify it—thus the twelve signs. 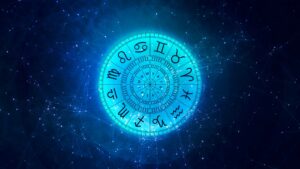 Modern opponents to astrology point out that these fixed star clusters are not actually in the same place at the same time relative to Earth as they were in ancient times when our ancestors observed them.

For example, the constellation Pisces is actually on the horizon when the constellation called Aries has supposedly ascended. Although the signs of the zodiac were named after the constellations, they are not the same thing. Our 360-degree ecliptic, the circle of space that surrounds our Earth on a flat plane in line with the sun, was split into twelve equal segments to accommodate the Zodiac. However, each Zodiacal constellation is not actually 30 degrees; it’s interesting to note that some modern astronomers have reclassified the largest of the twelve (Scorpio) into two distinct constellations, Scorpio and Ophiuchus. Moreover, some planetary bodies do not sit perfectly on Earth’s ecliptic with the sun, with Pluto so far removed that its designation as a planet has been called into question. From the perspective of the Earth, Pluto moves through constellations completely outside of the twelve (or thirteen) constellations. Although Sidereal Astrology at first seems to account for these incongruencies, even astrologers who follow this system cannot agree on the actual starting points amongst themselves, in part because each constellation does not take up exactly 30 degrees of the ecliptic.

As I write this, a friend of mine named Julie Cuccia-Watts is exploring “Real Sky Astrology,” an honest attempt to use the system of Tropical Astrology to interpret what is actually happening in the heavens at this moment in time (thus meaning that many who believe their Sun Sign to be Aries, in Real Sky Astrology find themselves to actually be Piscean)! To support these efforts, my husband and I are currently developing an iPhone App for astrologers wishing to chart the Real Sky Astrology positions and implement this knowledge into their astrology practice. (To find out more about Real Sky Astrology, visit Julie’s website.)

As a result of my own grounding in Astrological Tarot, the apparent incongruities of Tropical Astrology have never troubled me as they have many because through the practice of Astrological Tarot I recognize that although the constellations are convenient visual markers to identify observable changes, they do not necessarily cause the actual changes themselves. Astrologically-based tarot takes the wisdom offered by the ancient system of Tropical Astrology, and much like when a Horary astrological chart is cast it captures a snapshot of the particular cosmic energies manifesting to move the fabric of the universe in a particular direction—not because the Sun actually sits in the sign of Aries as we look heavenwards, but because the energy described by the Sun in Aries (the 3 of Wands) is manifesting in the querent’s life at this particular moment in time.

Every Major Arcana card in a standard tarot deck is also the pure expression of a particular astrological planetary or sign energy. Besides our planet Earth, there are ten other “planets”:

Along with the twelve signs of the Zodiac, this creates twenty-two Major Arcana cards; however, the actual cards usually number zero to twenty-one, as the Fool is generally numbered zero or else has no number at all.

The 10 Planets, in order of their average distance from the Sun, are:

The 12 Signs through the Major Arcana, in order of their progression around the Zodiac, are: 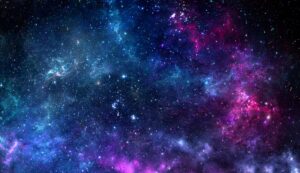 The four elements of Tropical Astrology find their voice in the Minor Arcana of the tarot:

Some interpret the Court Cards as the further mixing of these elemental astrological forces. This adds a profound depth to interpreting the Courts in a reading and is a worthy study, but you’ll have to check out my book The Alchemy of Tarot to explore this in-depth!

Each of the Minor Arcana pips, numbered 2 through 10, is a combination of a particular planet working in a zodiacal sign appropriate to the elemental energy of its suit. Because the Minor Arcana deal with the more mundane aspects of life on Earth—while the three outer planets deal mostly with worldwide and generational issues—the planets Uranus, Neptune, and Pluto are not utilized in the astrological combinations of the pips. Although every planet-in-sign combination is obviously not represented in the thirty-six suit cards, the addition of the Major Arcana and Court Cards allows for all possible astrological combinations in a reading, yet prevents the deck from becoming unwieldy and cumbersome to handle.

To further explore the astrology of tarot and begin doing astrologically-based tarot readings, pick up a copy of my in-depth exploration of the topic, The Alchemy of Tarot (now available in both deluxe soft-cover or E-book format). To start doing your own astrologically-based tarot readings much more quickly and easily, explore my first tarot deck, The Kingdom Within Tarot. If you’d like to take your Astrological Tarot journey even farther, check out The Healing Tarot:78 Ways to Wellness, a groundbreaking deck that uses the ancient practice of Medical Astrology and its astrological correlations to tarot to explore our health and healing. 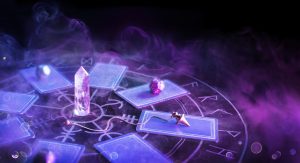